I had initially resisted airing any views on the Kandeh Kolleh Yumkella issue as I would probably not be viewed as a dispassionate and disinterested player in the whole saga. This issue has however dominated the news to such an extent that it will be an injustice not to proffer some comments, however tangential those may be.

My relationship with Kandeh Kolleh Yumkella goes back several decades to that school in the cemetery in Bo where I was his prefect while at sixth form when he was in his early years in Secondary school. I was later proud that he had indeed excelled himself on the international scene and was doing Sierra Leone proud.

Incidentally this is the same school (sorry college) that produced Solomon Berewa and Charles Margai and now six of the ten or so aspirants for the SLPP flagbearership -Kandeh Yumkella, Munda Rogers, Francis Lahai, Jonathan Tengbe, Ernest Ndomahina (in his earlier years before punctuating his stellar education at the old school by the hospital in Bo) and yours truly. (Photo: Andrew Keili).

But back to my story. Kandeh Kolleh Yumkella with political ambitions of rising up to the highest office in the land came back home some two years ago to join the political race for the Presidency under the party that his father helped found.

It has indeed been a tumultuous journey, and with high initial expectations he now seems to be hemmed in from all sides of the political divide-left right and centre.

The SLPP’s current problems started long before he came on the scene. It was however obvious that in pure Norman Schwarzkopf style in “operation desert storm” his strategy was “shock and awe”.

Disappointingly he was stopped in his tracks several times within his party-some might even say with the help of hidden hands in some circumstances. With a massive and ubiquitous political machinery and lots of converts to his cause, some of whom had hitherto sat on the political fence, he embarked on his mission. But first he had to contend with road blocks.

When he attempted to visit the SLPP head quarter office in Freetown with a massive crowd, he was stopped in his tracks-his mother’s head covering was unceremoniously removed and he was spat upon. His security retinue arriving at Lungi was arrested for possessing “offensive weapons”-in effect stun guns and they became guests at the Pademba Road correctional centre.

I recall being at the end of one of these “stop Kandeh Kolleh Yumkella” incidents when, as part of the All Aspirants’ Alliance (Alliance) we had received invitations to attend a NEC meeting in the party office.

On the morning of the meeting I received a phone call from a highly placed official at the party office advising me that the invitation had been withdrawn and I should not venture to the office because as he said “a nor want mek big man disgrace”.

I then went about my business but later received a call from my other Alliance colleagues suggesting we should nevertheless go there and find out. I drove to the party office late only to see my colleagues including Kandeh Kolleh Yumkella stopped at the front gate and refused entry to the office in the full glare of the public-a saga whose now infamous pictures made it round social media circles.

The refusal by the Sierra Leone Police to grant him permission to arrange a rally in Bo seemed unfair as he seemed to be singled out whilst others were allowed to circumnavigate the country. Then followed an incident in which he was reportedly prevented from entering the party office in Makeni.

Thanks mainly to the dint of his perseverance and the cloak provided by the All Aspirants Alliance, Kandeh Kolleh Yumkella became “less toxic” and to be fair, things have improved considerably over the few months.

He has prayed several times in the party office and been round several SLPP crowds around the country unfettered. He also joined us as part of an Alliance team that visited the Bo party office and were hailed even by supporters of other aspirants who were against the Alliance, as we were preaching peace.

During all of this period, Kandeh Kolleh Yumkella’s problems have been largely internal, although some other parties may have been watching to see if the party will implode. Then came the suspension of his campaign and his statement that he may consider other options.

The bye election in a small ward in tiny Kychom, in which the Independent candidate he is said to have put up won bolstered his image in his neck of the woods. The APC had sent in some big guns and considerable resources to little Kychom and they left with egg in their face.

This was the first time APC had lost a bye election in the North for years-and the big guns who treaded their big toes on little Kychom were a who is who of APC in Kambia and the country at large-Alimamy Petito Koroma, Sam Sesay, Ambassador Yansanneh-you name them.

The obviously rattled Yansanneh, having seen his party belittled, despite their infamous “ninety nine tactics” blamed the poor Imam at the Kychom mosque for praying for God’s pestilence to fall on the “third and fourth generation” of those who do not vote for the independent candidate put up by their “son”. He attributed their loss to this.

Any chance the SLPP can secure the services of this Imam round the country in 2018?

When did Kandeh Kolleh Yumkella claim he was President Koroma?

“Mohamed Bangura warned the former SLPP flag bearer aspirant, Dr. Kandeh Kolleh Yumkella to stop impersonating President Dr. Ernest Bai Koroma by falsely claiming that, he (Kandeh Yumkella) had been assured by President Koroma that he would succeed him as President of the Republic of Sierra Leone….He has been making such misrepresentations to some world leaders… This is criminal and he should stop spreading such dangerous falsehood”, Mr. Bangura warned. I want him to publicly deny that he has not been impersonating the President to some world leaders…If he does that, I will expose him further”, Mr. Bangura said

Some further explanation by the linguistically challenged Bangura indicated he meant Kandeh Kolleh Yumkella was “misrepresenting the President especially some African and Western capitals that he has been ordained by President Koroma to succeed him”.

Not satisfied with his “impersonation” accusation, he made light of Kandeh Kolleh Yumkella’s role in the Ebola crisis: “Where was he when President Koroma and other Opposition party leaders were working together to fight the disease? …I can assure you that, he was somewhere around New York, in his comfort zone.”

He also accused Kandeh Kolleh Yumkella of fermenting chaos in the country by falsely claiming that, the government does not care for about twenty thousand ex-servicemen. “This is a very dangerous statement of incitement to make”, the Information Minister said. 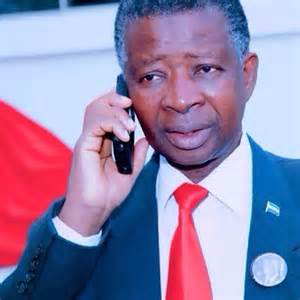 anneh (Photo) also joined the fray. He was caustic about the coalition Kandeh Kolleh Yumkella was purportedly putting together. He said there are many disgruntled people who are in the coalition and the coalition will be chaotic as everyone will want to be the leader.

“Those issues that drove them from their former parties will still follow them in the coalition.” He said Kandeh Kolleh Yumkella would not dare suspend his campaign without getting thrown out of the party if he were in the APC.

Not to be outdone Former Deputy Information Minister and now Presidential Liaison for Traffic lights, widening his remit beyond traffic lights has also done a hatchet job on Kandeh Kolleh Yumkella.

Kandeh Kolleh Yumkella has certainly received bad press these past few weeks. Accusations levied against his character have ranged from his being manipulative to egotistical to untrustworthy.

Kandeh Kolleh Yumkella must have obviously touched a raw nerve with several groups to deserve such ire.

Of course his ardent supporters have fought back and Mohamed Bangura (Photo) in particular derided for his gross lack of understanding of the English language. His own character has been called into question.

But why the intense interest in someone who has suspended his leadership quest in an opposing party by the APC and why the relative civility of the SLPP after initial temper tantrums levied by some party officials at the “defector”?

Some aspirants, bar a few dissenting ones met to express solidarity within their ranks and continued commitment of the party to sort its problems out for electoral victory in 2018.

The SLPP Executive has especially been kind, even to the extent of extending an olive branch to a “traitor”.

The Party’s most recent press release waxes poetical and conciliatory when it says:

“Notwithstanding that the party has problems with the way and reasons proffered for his (Kandeh Kolleh Yumkella’s) current stance the door remains open should he reconsider his decisions to come back to the fold to contribute to the party’s quest for political power. Thus the party deems the event as “a tempest in a family tea cup” that fizzles out without any visible cracks.

Only time will tell how big that tea cup is and whether the tempest may not in fact spread beyond the tea cup.

Mohamed Kamaraimba Mansaray who in typical style sees no controversy he does not jump into and no microphone he does not use has also been at Kandeh Kolleh Yumkella’s throat.

Asked if he would accept Yumkella as flag-bearer of the ADP, Mansaray said, “The Party has no room for another flag-bearer… but there is room. A window of opportunity is open for him as a running mate, but he should do it as fast as possible since people are coming up for that position.”

Meanwhile in the midst of this tempest Kandeh Kolleh Yumkella continues airing his views on various media and in diverse fora at home and abroad.

There is talk of coalition in the air and parties being formed . Political pundits have gone into overdrive assessing the possible scenarios for 2018. There are either overt problems in existing political parties or other potential problems simmering beneath the surface.

One man, Kandeh Kolleh Yumkella however remains hemmed in from all sides. His future plans and potential to succeed have been the source of much speculation. Whatever the case, one thing is clear, he has rattled the cage and when the tigers escape from the cage, there is no telling in which direction they may run.

Kandeh Kolleh Yumkella’s next move must be watched closely, but for now he seems to be driving the political narrative.